Good Morning, Everyone! Hope your Christmas was Merry & Bright! Today, I’m offering a Happy New Year special, in the hopes that something fun will get the new year off to a great start. If you haven’t checked out my Riverbend series, now’s the time! Each book will be on sale for the (ready?) “low, low, LOW” price of $1.99 from today through December 31. Riverbend is a fictional small town in central Florida where anything can happen. And does. Unlike my mountain series, there’s nothing paranormal going on here because the folks who live in Riverbend are weird enough all by themselves. 😀 Hope you’ll check it out.  Happy Reading!

Wildlife photographer Gunnar Wolfe looked like the kind of guy every man wanted to be and every woman just plain wanted, and the St. Johns River of central Florida drew him like a magnet. EcoTour boat owner Maggie Devlin knew all the river’s secrets, including the deadliest ones found in the swamps. But neither Maggie nor Gunn was prepared for the danger that would come after them on two legs.

On a quest to make history photographing the rarest birds of them all, Gunnar hires the fiery, no-nonsense Maggie to canoe him into the most remote wetland areas in the state. He was unprepared for how much he would enjoy both the trips and Maggie’s company. He soon realizes he wants more than she’s able to give, but before he can win her over, they make a grisly discovery that changes everything, and turns the quiet little town of Riverbend upside down. A serial killer is on the prowl among them. 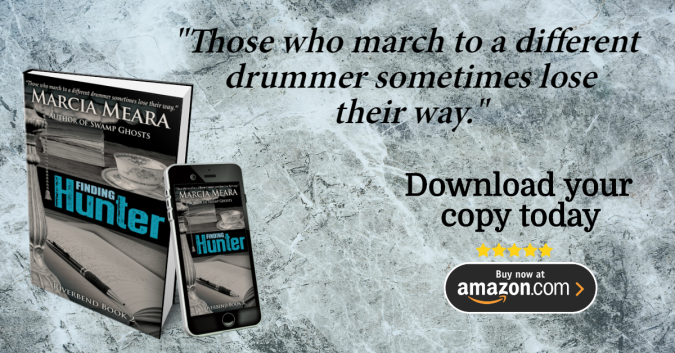 Before, I never thought about taking a life. Not once.
Now, the thought fills my mind day and night, and
I wonder how I’ll hide that terrible need,
As an old car swings to the shoulder,
And stops.

Hunter Painter’s darkest fears have shaped his offbeat personality since he was a child, crippling him in ways invisible to those unable to see past his quiet exterior. In a sleepy Florida town known for its eccentric inhabitants, he’s always been a mystery to most.

Only one person sees beyond Hunter’s quirky facade. Willow Greene, the new age herbalist who owns the local candle and potpourri shop, has secretly loved him since they were in high school. When, sixteen years later, she discovers Hunter has loved her just as long, Willow hopes her dreams are finally coming true.

Willow soon learns that Hunter fears happiness at her side isn’t in the cards for him. With her natural optimism and courage, she almost convinces him he’s wrong—that they can really have that life together they both long for—but even Willow can’t stop what Hunter knows is coming.

One by one, his worst nightmares become reality, culminating in an unthinkable tragedy, which devastates everyone it touches. Willow’s battle begins in earnest as Hunter is plunged into a bleak, guilt-ridden despair, threatening to destroy not only their love, but Hunter, himself.

Finding Hunter is the story of a lost man’s desperate struggle to make his way home again, and one woman’s unshakeable faith in him and the power of their love.

“There are dark places in every heart, in every head. Some you turn away from. Some you light a candle within. But there is one place so black, it consumes all light. It will pull you in and swallow you whole. You don’t leave your brother stranded in that darkest place.”
~Hunter Painter~

As the shocking truth emerges, one thing becomes obvious—Jackson will need unconditional love and support from both of his brothers if he is to survive.

Just as he begins the long road to recovery, danger, in the form of a sinister, unsigned note, plunges him back into bleak despair. Scrawled in blood red letters, the accusation—and the threat—is clear. “MURDERER!”

Will the long, harrowing ordeal that lies ahead draw the Painter brothers closer together, or drive them apart forever?

Suspenseful and often heartbreaking, this small-town tale is a testimonial to the redemptive power of love and paints a story filled with humor, romance, and fierce family loyalty.

And there you have my last sale of the year. Hope you’ve found a new book or two that appeals to you. Thanks so much for being such a lovely group of followers. You’ve made my life richer throughout good years and not-so-good ones, and I appreciate every single one of you! Here’s to a much better year ahead!

HELP! Where Did All My Writing Time Go?

Happy Moon’s Day, Folks! I hope this Monday morning finds you in good health and good spirits. Just wanted to take a moment to let you know that my blog posts may be spotty for a bit. I have finally come to the conclusion that I am never going to get caught up again in this lifetime, but I can’t keep floundering in a sea of To Do Items and ignoring my writing. Sad but true, the time comes in life when we no longer have quite the energy or stamina we once did, and we have to slow the pace a bit.

As a result of the above-mentioned (and truly annoying) energy decrease, I haven’t written a word in months, and it’s making me very unhappy. Therefore, I’ve decided I’m  going to take some time to write each day (at least until I get my 4th Riverbend novel completed) even if it has an impact on my blog posts and my blog visits. I’ll do the very best I can to keep up with both, but if I miss some of my regular features or a stop or two at my favorite blogs, please forgive me. And don’t be alarmed. It just means I’m working on my book.

I know most of you will understand how frustrating it is to want to write but not have time to do so. (And the pandemic isolation, oddly enough, was not at all conducive to the process for many of us, either.) The good news is, I started said book Friday and managed to get the short prologue and the first two scenes of Chapter 1 written. Words cannot express what a difference even that little bit has made in my overall mood. Stress levels are definitely lower, and I’m actually smiling again.

I have #GuestDayTuesday posts scheduled for several more weeks, and will definitely be reblogging Bad Moon Rising posts through the month’s end, and Story Empire posts always, so it won’t be completely empty here. I plan to touch base at least weekly, and I’ll try to find time for other goodies here and there, too, though I’m not going to promise when or how often. Once I’ve made substantial progress on this story, I’m sure things will starting heading back to normal, but until then, I hope you’ll all understand if you see less of me online for a few weeks.

Thanks so much, and now, the Painter Brothers are demanding my attention. They have some interesting things happening in their lives, and some new characters coming into play. Must. Go. Write.

Yes I know these three guys are really actors, but in MY world,
they are Hunter, Forrest, and Jackson Painter, and I’ve
truly missed them! 🙂 ❤

Starting tomorrow, Book 3 of my Riverbend series, That Darkest Place, will be on sale for $1.99. For one week only, save $3.00! Physical trauma, grief, survivor’s guilt, love, and the unbreakable bond between brothers. This one has it all!

REVIEWS FOR THAT DARKEST PLACE

“. . . This novel is a frank and realistic portrayal of a family who has had more than their share of tragedies and has come out on the other side better, stronger, and closer for it all. The best part is there’s no candy-coating or false happily-ever-after. These types of problems don’t go away in a few weeks, and Meara shows that reality in a compassionate and unidealized manner.”

“. . . Hunter, Forrest and Jackson Painter, like all of us, struggle with getting it right in dealing with life, friends, and loved ones. Throw in a vindictive mystery letter writer and you have another great Riverbend story. “

” . . . refreshing to see strong female leads in the story rather than damsels-in-distress. That doesn’t mean these ladies don’t feel pain or need support. It just means they can give as good as–actually, much more than–they get.”

“. . . excellent series which includes romance, heartbreak, suspense and family dynamics, in a wonderful setting…and not forgetting those Painter brothers.”