Please welcome today’s guest, Jeanne Owens, the first brave soul to share ten things about herself that you might not already know. Jeanne, I commend you for emailing me right away, and I’m happy to share your list with everyone.

Ten Things You May Not Know About Me
by Jeanne Owens

1. I was born and raised in Virginia, and still live there.

2. My first time flying was when I went to Ireland in 2004 as part of a study abroad trip with a group from a local community college. I’d love to go back again someday.

3. I am interested in the paranormal, and have had a couple of odd experiences but I’m not sure if they were really paranormal or not.

4. I’m an amature photographer and love taking photos of nature and the moon.

5. I’m a bit of a geek, enjoying among other things: Star Trek, Star Wars, Harry Potter, Lord of the Rings, Doctor Who, anime, etc.

6. I dabble in reading tarot cards and have at least a dozen different decks.

7. I wrote my first “book” in high school. It was a Fantasy inspired by a Terry Brooks book. I’d written a little before then, but I think this was my first more serious attempt.

9. My mother named me after Joan of Arc (Jeanne d’Arc).

10. My taste in music is rather eclectic. For example, I like Classical, Big Band, “Oldies”,
Country, Rock, Metal, Jazz, J-Pop and J-Rock. 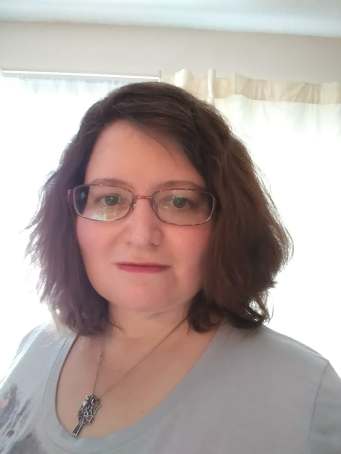 Jeanne Owens, a native of Virginia, is an avid reader and a fan of sci-fi/fantasy and anime. She is also an animal lover and supporter of animal charities. She has been writing for many years and has written numerous short stories. Kismet and Tell, the first in the Adventures in Sorcery series, is her first novel. Visit her website at http://jeanneowens.weebly.com to follow her on Facebook, Goodreads, Pinterest, and Tumblr, on Twitter @risscobalt, and to also follow her blog. 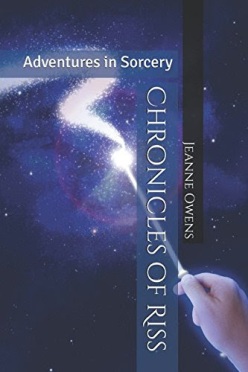 You can reach Jeanne on Social Media Here:

So happy to have Mae Clair visiting us today to talk about the Murder They Wrote anthology. I can’t wait to grab a cup of tea, plop down in the Comfy Chair, and get going on this one. I think you’ll feel the same way when you read about all the goodies it contains, so let’s make Mae feel welcome here this morning as she gives us the details. Take it away, Mae!

Thanks for hosting me today, Marcia! I’m super excited to be here sharing news of an anthology in which I have a short story.  Murder They Wrote brings together seven authors writing in various sub genres of whodunits. 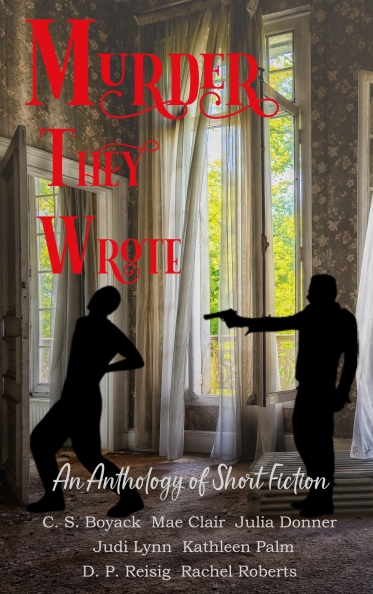 You Can See the Variety by the Blurb:

Are you a fan of courtroom drama? In the anthology’s first story, Abraham Lincoln defends a friend’s son against a charge of murder.

For lovers of speculative fiction, Jason Fogg dissolves into mist to sneak through open windows and snoop for clues.

How about a cozy? Jazzi, Jerod, and Ansel discover a dead body while renovating a kitchen, dining room, and half bath.

Have a craving for a Regency? Lord Peregrine and his wife, Elizabeth, use their sharp minds and quick wit to solve a murder at a garden party.

Need a bit of literary fiction? A young, lonely widow must deal with the theft of a valuable butterfly collection.

And what about a little psychological horror? Twin sisters discover that their attic is haunted by not one, but two ghosts.

Last, but never least, the anthology concludes with a historical mystery. A young, newly married knight is accused of murdering his obnoxious host at a holiday gathering in his castle.

If you’re wondering which one of those stories is mine, it’s the last one.  🙂

Normally, when I write a mystery, there is an old legend, or a paranormal element involved. Readers know me as a writer who loves creatures, but I wandered in a different direction this time. My story, A Winter Reckoning, is a straight murder mystery with a sizable group of suspects, an isolated location (a snow-bound castle), and—of course—a dead body. <cue theatrical music>

I chose a Medieval setting to tell a tale that I hope will keep readers guessing as they consider and discard suspects. There is a chivalrous romanticism attached to knighthood, and a courtly type of cunning that comes with intrigue. In many ways it is like a chess match.

My father first taught me how to play chess when I was in grade school. I like to think that strategy of manipulating pieces on a gameboard, transferred into manipulating characters in my story. And unless my lead, Sir Richard Essex, discovers who murdered a deceitful nobleman, his own life will end in checkmate.

A Winter Reckoning is just one of seven stories contained in Murder They Wrote, and I think you’ll enjoy the variety. I wish you happy reading and happy sleuthing!

Connect with Mae Clair at BOOKBUB and the following haunts:

I’m so pleased to announce we have a first-time guest on The Write Stuff today, and what a guest she is, too! Some of you may have met her on other blogs, but for those who haven’t, please welcome Lisa Burton, Craig Boyack’s personal assistant and spokesmodel. (Oh, and I should probably mention Lisa is a robot, in case you’ve never run into any personal assistants who have that distinction.)

Lisa, we are delighted to have you join us, so step right up. You have the floor!

Wow, Marcia, it’s such an honor to finally meet you. I haven’t been to Florida in ages, and hope to do some poking around when we’re finished. Maybe we can go hug one of those cute manatees or something.

Craig sent me here to plug his new book, Grinders, and I’m kind of excited about it. Robot girls love science fiction, and as a cyberpunk story it scratches that itch. There are even robots in the story, but that isn’t my topic today.

My assignment is to talk about the antagonist in the story, which I usually don’t do. This guy is kind of quirky and it’s hard not to feel the pressure he’s under. His name is Leonard, but he goes by Nootropic. It’s a nickname based upon a kind of drug he abuses. These are performance enhancing drugs for brain power, and he’s going to need all he can get. He also lives off something called 48-hour energy drinks, because in the future five-hours is old school.

Needless to say, he doesn’t get much sleep. He is a grinder himself, but it’s mostly the research and development of new techniques. He discovers new ways to implant humans with small bits of technology and they’re willing to pay big bucks. As one example, he has these spiral coils implanted in the back of his hands. They function like the inner ear, and he can detect vibrations just like you or I might hear something. Makes him kind of hard to sneak up on.

He’s under a mountain of pressure, because his wife is dying. She’s kept alive in a tube full of perfluorocarbon, which humans can actually breathe in. Of course he needs to keep filtering it and maintaining it.

See, she needs a new liver or she’s going to die. Since they are both wanted by the police, he isn’t willing to turn her over to modern medicine. Back when he held a real job, he developed a technique for growing a new liver for a pharmaceutical company, but they rejected it based upon profit and loss statements. It’s basically abandoned intellectual property, but could save his wife’s life.

He hatches this scheme to steal the notes, and perform the procedure himself. There is another problem though. His name is Georgie, and he’s a toddler. While working himself to death, Nootropic has been neglecting Georgie something awful. In his mind, Georgie will get over it after he saves his mother and reunites the family.

Nootropic is dealing with this ticking time-bomb, because his wife will die if his scheme doesn’t work. They’ll both go to jail if he takes her to the hospital, and Georgie will wind up as a foster child somewhere. Like I said, some real pressure. Then again, despite the nootropic drugs and 48-hour energy drinks, he has to sleep some time.

Without knowing it, the heroes in this story are closing in on him the whole time. Might not give him any added stress, but the readers will understand.

Nootropic Faber isn’t a particularly nice guy, but there are times when you feel for him. I think that makes him kind of cool.

On my visits, I always bring around a poster to share. This is me posing as Nootropic’s wife, floating in her tube. Some people collect the posters, and it’s fine if they want it as a phone screen or anything like that.

Funny story about this poster: robot girls don’t have to breathe. We used Kool Aid in the tube because it was cheaper than perfluorocarbon. We also don’t float, so I had to keep propping my butt up with a glass roasting pan until Sean could make his sketches.

Hope your fans enjoy the poster, and that some of them check out Grinders.

Thank you so much, Lisa! I’m so glad I finally had a chance to meet you in … erm … person, and it has been a delight to have you with us today! You’re always welcome here on The Write Stuff, and we look forward to your next visit!

Jimi Cabot made one mistake as a starving college student. When she went to work for the San Francisco Police Department, it nearly cost her the job. The union stepped in and they had to reinstate her. They did so by assigning her to the duty nobody wants, Grinder Squad.

Grinders are people who use back room surgeries to enhance their bodies with computer chips, and various kinds of hardware. Jimi is sure that if she can just bust one grind shop, it will be her ticket back.

Paired with veteran cop, she soon learns that Grinder Squad is a cash-cow for the department. They are nothing more than glorified patrol cops, and generally get the worst assignments.

Matchless is the most wanted grinder of all time. He disappeared years ago, leaving only the evidence of those he enhanced during his career. With these pieces, Jimi picks up the cold trail to try working her way back to more respectable duty.

Grinders is a cyberpunk story set in a world where global warming has eroded coastlines, and society has solved many of our current problems by replacing them with new ones. There are cyber shut-ins, cyber-currency skimming schemes, and more in this futuristic tale.

This book also takes the opportunity to poke a stick at current issues that seem to have lasted into the future. Entitled people, helicopter moms, overzealous homeowner associations, and lack of decent jobs are all present. Never preachy, these issues make up the day to day work of a patrol officer.

I hope you enjoy Grinders as much as I enjoyed bringing it to you.