It’s getting closer, folks, and I’m getting more and more eager! Of course, you do realize if this book turns out to be lousy, I’ll be the most disappointed person on the planet! 😯 But Jim Butcher’s writing hasn’t let me down yet, even if I have been driven half mad by this long wait. (Can we say it all together, Boys and Girls? SIX YEARS!! Ahem. Thanks.)

My choice for Dresden Files character of the day is Michael Carpenter, a close and trusted friend of Harry Dresden. He is a devout Catholic, and a Knight of the Cross, who wields a mighty sword called Amoracchius.

This is my favorite fan art representation of Michael, and it looks
pretty much exactly as I imagine him.

Michael’s own words give you a pretty good picture of who he is.

As you can see from the next two paintings,
Michael is a handy person to have on your team,
as Harry well knows and appreciates. 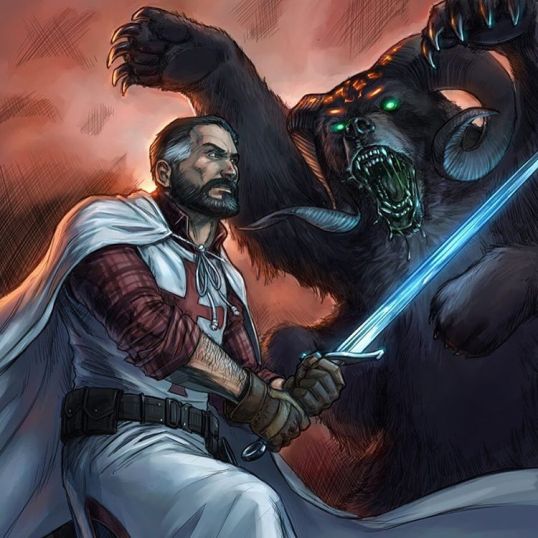 As the series progresses, Michael’s role in Harry’s life
grows in importance and scope, but rest assured,  he never
flinches from doing what he believes to be right.

A FEW MICHAEL AND HARRY MOMENTS TO MAKE YOU SMILE
(With a teeny bit of mild “language.”)

That’s it for this week, folks, but not to worry. I’ll be back next Tuesday with another glimpse into the world of Harry Blackstone Copperfield Dresden–if the bridge don’t go, an’ the creek don’t rise, that is.

ONE LAST WORD FROM HARRY.
REMEMBER: