Hi, Marcia. Thank you for opening your blog to me today.

I know you have an interest in the paranormal, in romance, and in thrillers. Today, I’m going to share an excerpt from my newest release, Tortured Soul, the fourth and final installment of the Medici Protectorate series. This book has all those elements (and then some). I hope you and your readers enjoy it.

(Note: These guys are battle-hardened and make free use of swear words, particularly when in the heat of action. To keep this post reader-friendly for all audiences, all instances of such words have been tamed or deleted.) 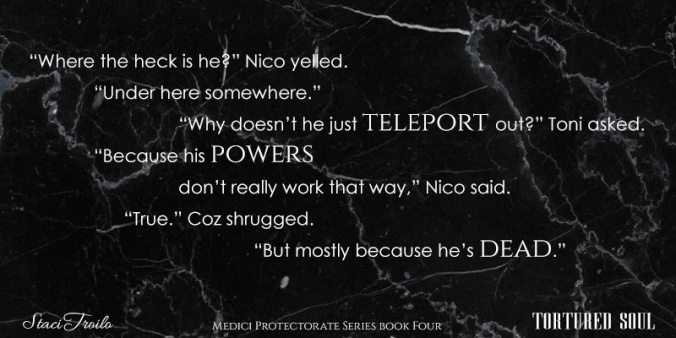 “I do not know that ‘where’ is the correct term for what you are asking.”

Coz glanced around. No one reacted like they could hear him.

“They cannot hear me.”

Where the heck was he talking from? “Mike?”

“You do not have to speak aloud, Roberto. I am communicating with you, mind-to-mind.”

Coz started thinking his replies instead of speaking them. “Didn’t know you could do that.”

“What?” That exclamation he did say aloud, and it echoed through the night.

“Roberto, you can hear me because of your affinity for communicating with the dead. I fear I do not have much time.”

“Time?” Coz thought. “Stay away from the light!”

“Did you hear that?” Toni asked.

“Why does everyone keep bringing up ghosts?” she asked.

“Mike? You there?” Coz sent his thoughts out into the night.

“You passed by my body on your way into the compound. Lead Dominico to me and have him revive me.”

Coz continued to communicate with Mike in his thoughts. “But he’s never done that before. He couldn’t even bring Marcus back.”

“Marcus was ready to move on. I am not. Bring Dominico to me.”

“Where the heck are you?”

“I was in the office when the explosion hit. You will find me under—well, under it.”

Coz shook his head and spoke to his brother. “Nic! Back track. I need you.”

Nico climbed over rubble and headed toward his brother. “What the heck, Coz?”

“Where is he? How’s he talking to you and not the rest of us?”

Coz helped Toni around more of the debris. Nico and Donni met up with them, and they kept picking their way back to where the office had been.

“Start moving this stuff out of the way,” Coz said. “And be careful.”

“Where is he?” Nico yelled.

“Why doesn’t he just teleport out?” Toni asked.

“Because his powers don’t really work that way,” Nico said.

There you have it. A little paranormal twist, a lot of action. Love interests are there, although they’re preoccupied with other things at the moment. Rest assured, though, they take a chance at making their budding relationship work. If you want to know more, click the various links in this post. 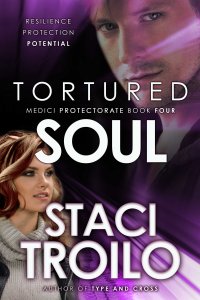 Protection is safety. Until it stifles.

After months of clandestine battles, the Brothers of the Medici Protectorate finally know who is responsible for the assassination attempts on the Notaro family, the secret descendants of the Medici line. And they’ve never faced such a formidable foe.

Roberto Cozza–Coz–faces this new reality with surprising pragmatism. His powers may make the difference in winning their covert war–if only he can master them in time. It would just be so much easier if he could get his emotions under control, but neither his Brothers nor their charges are making things easy on him.

Toni Notaro appreciates the security provided by the Brothers, but she knows she has her own role to play–and it terrifies her. She is the missing link in Coz mastering his emerging abilities, yet she struggles to bridge the gap between what he needs and what she can offer.

As the Brotherhood hurtles inexorably toward the climactic final showdown, Coz and Toni must find the strength within themselves and each other to master the secrets of his powers, or risk death and defeat for all they hold dear. 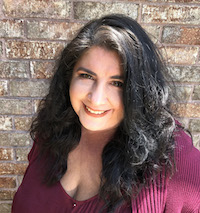 Staci Troilo writes because she has hundreds of stories in her head. She publishes because people told her she should share them. She’s a multi-genre author whose love for writing is only surpassed by her love for family and friends, and that relationship-centric focus is featured in her work.