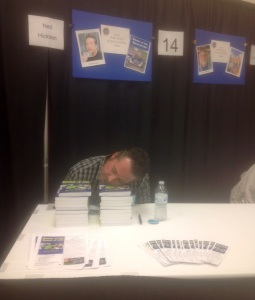 Two years ago tomorrow, I attended my first book fair as an author. Today, I’m going to share that experience in a post I’m calling:

Reasons to Hide Liquor Under Your Book Fair Table

Admittedly, it’s very exciting to walk into a room of 50 or so booths with publishers and authors offering their latest releases and services. And when you see your own booth tucked among them, with your book cover on display and a large photo of yourself hanging on the wall behind your table, you can’t help but pause and quietly think: I have arrived as an author and, judging by its size, my nose arrived about an hour before I did. My point is that book fairs are about taking the opportunity to become three-dimensional to readers and making a connection beyond the printed page; it’s about revealing yourself to people in ways that are spontaneous, real and unrehearsed, and giving them an experience they can take with them and talk about with others. This led to another realization almost simultaneously: Why is there no liquor at this thing?

This notion was underscored moments later, when a woman appearing to be in her mid-60s approached my booth and began telling me how much she loved my writing, almost to the point it was becoming a little embarrassing. “I NEVER miss your column!” she declared. “Really — If it wasn’t for your column, I doubt I would even subscribe to the Register-Guard!”

In my mind, I began pouring two fingers into a shot glass. Why?

“Um, I write for Siuslaw News,” I said with an awkward smile. “I think you’re talking about Bob Welch. He’s got a table right over there.”

In that moment, if there had been an actual shot glass on the table, I’m pretty sure she would have taken it from me, chugged it, wiped her lips with one of my bookmarks and gone to see Bob Welch. Instead, she stood immobilized and looking for a gracious exit.

“OK, actually I am Bob Welch,” I said. “I killed Ned Hickson and have assumed his identity to expand my writing empire. If you don’t tell anyone, you can help yourself to one of my books over there.” I pointed to Welch’s booth, which was unmanned but stacked with copies of My Oregon, Pebble in the Water and others. “If anyone asks, tell them Bob sent you,” I said, and winked.

The woman who I came to know as Joan, smiled. “So… who did you say you write for again?”

Those words led to my first book sale of the day, and understanding the importance of meeting readers face-to-face, even if yours wasn’t the face they were looking for. During the course of six hours at my booth, I met lots of people who had no idea who I was, many of whom were drawn to my keen marketing strategy…

As you can imagine, the corners went very fast…

At first, when I saw that some people were definitely unamused by my scone offer, I began to question the wisdom of my marketing strategy. Was it just an act of desperation in order to compete with the zombie book guy across the isle, who had creepy music, flashing lights and a mini fog machine? Oh, and actual BOOKS? As I thought about this, a woman made her way to my booth and looked at my scone and shook her head.

“My husband was just here and told me about your scone,” she said. “We’re visiting from Arizona and our paper doesn’t carry your column. Is it anything like your scone offer?”

“I’d say it’s exactly like my scone offer,” I told her. “The humor in my column is very dry.”

As I sold my next book, I began to see my scone as something more than just a cranberry-flavored marketing tool. It was also a barometer of sorts, instantly gaging people’s sense of humor. Those who didn’t get it because of their own internal high pressure system wouldn’t be happy with the book anyway. In that moment I stopped worrying about who did or didn’t stop by my booth; you can’t be everything to everyone.

At least, not without a mini fog machine.

When it came time to go to the “Authors Reading Area,” where I was supposed to read selected passages from the book, I was encouraged when I saw all the seats were filled! Some folks were even standing in the aisle! This feeling of elation was quickly followed by an even stronger feeling: The urge to vomit.

This wasn’t from fear as much as it was from advice taken from The Brady Bunch regarding talking in front of a crowd, which is to picture everyone in their underwear. This doesn’t work when your mother is in the crowd. So I fixated on my wife instead, which worked well, except that I almost forgot about reading… 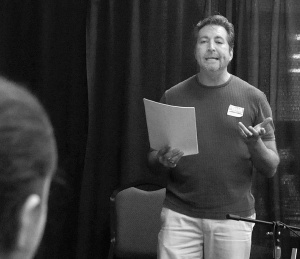 Once I stopped thinking about my wife in her underwear (or whatever), things went smoothly at my “Author Reading.”

I eventually got focused and read some of my favorite passages, picking up a few more book sales along the way — including one from the zombie guy, who came up afterward and told me I “knocked them dead.”

Just imagine what I could do with a fog machine…

(Ned Hickson is a syndicated columnist with News Media Corporation and a member of the writing team at Long Awkward Pause. This has been an excerpt from his first book, Humor at the Speed of Life, is available from Port Hole Publications, Amazon.com or Barnes & Noble.)

37 thoughts on “Selling books is great; making an impression is even better”