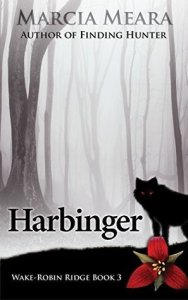 Since things are a wee bit slow as summer heads into fall, I thought maybe I’d schedule another #ExcerptWeek. I will do a separate post on exactly when, and how to take part, so stay tuned for that. In the meantime, just to get you thinking about what you’d like to share with us, here’s an excerpt of my own from my latest book, Harbinger. A moment to provide a wee bit of comic relief in this shivery tale. Mac and Rabbit are on their way home from a visit with  Sheriff Raleigh Wardell, where 11-year old Rabbit got to spend time with Raleigh’s grandson, Finn. Rabbit was raised in the wilderness, and Finn is the first child he’s ever met. Today, he also met Finn’s sister, Merry, who has left him gobsmacked, as Raleigh would say.  Men are from Mars, Women from Venus? Maybe so. Hope you enjoy it.

“You really enjoy visiting with Finn, don’t you?”

Mac reached across the seat and tousled his hair. “You can do better than that, can’t you? After all, you knew Finn had a sister.”

“Well, then, what’s got you so quiet about meeting her? Are you saying she wasn’t nice?”

“Just okay? I thought she was very pretty, and she seemed like a friendly girl.”

Rabbit gave a long, drawn out sigh. “You wouldn’t understand,” he finally muttered.

“Wouldn’t I? Do you think you’re the only guy who’s ever felt shy around a girl?”

“Just didn’t know what to say to her.”

Mac grinned. “Ah. I see the fine distinction there.”

Scowling, Rabbit flushed redder than ever. “Don’t make fun. I ain’t never had that happen to me before.”

Mac’s smile disappeared, and he blew out a long breath. “I guess it does take some getting used to, doesn’t it? That feeling you get around them, when you want to say the right things, and look clever or funny, but nothing comes out the way you think it will.”

Rabbit turned sideways in his seat. “Did you feel like that when you met Mama? I mean, like every word you ever knew just up an’ left your brain, an’ you couldn’t quit starin’ at her, an’ you just knew that she could tell exactly what was happenin’ to you?”

Thinking back to the day he had raced down Sarah’s drive, hunting Rosheen, and had seen his future wife for the first time, Mac remembered the alarm he’d felt. “Yeah. I think you’ve about summed it up. Women have this way of turning men into powerless, speechless dolts sometimes, especially when we first lay eyes on them. It can knock the wind right out of our sails, but you’d better get used to it. You’re growing up fast, and it’s sure to happen more and more.”

“Huh.” Rabbit grew quiet again. After a few minutes, he blurted, “Trouble is, I can’t tell if I like feelin’ this way, or I hate it worse’n anything.”

“Welcome to the club, partner.”

He pulled his truck into the drive, and Rabbit raced for the house almost before it came to a stop. By the time Mac joined his family in the living room, the boy was in the middle of telling Sarah everything.

“An’ she was beautiful, Mama. Like you. Like an angel, but only wearin’ jeans an’ a t-shirt like me an’ Finn. An’ hangin’ on the fence to feed Pawnee an’ Peanuts, too.”

As Rabbit bounced a laughing Branna on his knee, Mac nodded his agreement. “She was, Sarah. A very pretty—”

“I mean beautiful. She was a very beautiful young girl. Charming, and just as nice as Finn.”

Rabbit handed Branna to Mac, then rose to pace back and forth across the living room floor. “I reckon I expected Finn’s sister would be just like him, only maybe wearin’ a dress, or carryin’ a doll, or somethin’. I never figured on someone like Merry. Are all girls so beautiful an’ smart?”

Sarah grinned at Mac before answering. “Some are, yes. And some aren’t. In that way, they’re very much like boys, Rabbit. Each one is different, but all of them are special.”

“Do they all make you feel unhappy about your own self?”

A slight frown touched her face as she responded. “How do you mean?”

“Dunno,” Rabbit mumbled, not meeting her eyes. “It’s hard to put in words. I reckon it’s that I wanted her to like me, but then I couldn’t come up with nothin’ good to say, an’ I started thinkin’ she wasn’t never gonna like no boy raised on a mountain like I was, anyway. I don’t even go to school, or into towns, or nothin’. For the first time, I saw there wasn’t all that much about me for her to like.”

Mac and Sarah started to protest at the same time, but Mac gave way and let his wife speak.

“Oh, Rabbit. You don’t ever have to feel bad about who you are. You’re so special, and so sweet, any girl would be happy to have you as a friend. Just you wait. If Merry doesn’t know this already, she soon will.”

“You sure, Mama? I’m askin’ you ‘bout this here stuff, ‘cause Daddy already told me that men mostly can’t understand women at all, so I figured you’d be the one who could ‘splain these things to me. I ain’t never had to think ‘bout girls before.” Rabbit’s voice went up an octave as a panicked expression swept across his features. “An’ now, I can’t think about nothin’ else!”

Mac ruffled Rabbit’s hair. “Don’t worry, Little Rabbit. Women might not make sense to you right now, or maybe even later on, but trust me on this. They’re worth it.” 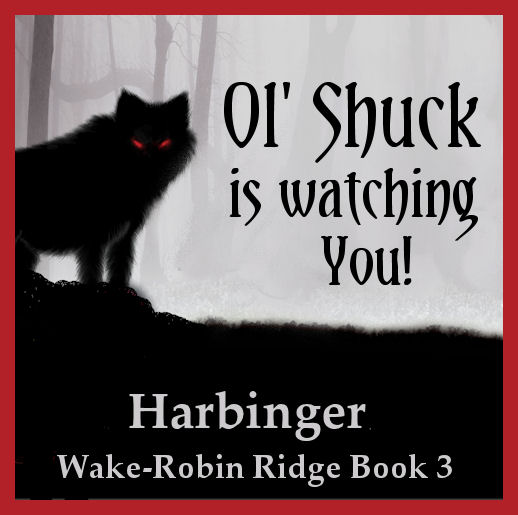 Last chance to download Harbinger: Wake-Robin Ridge Book 3 for free. Promo ends in just a few hours, so be sure you’ve got your copy. Thanks to those who’ve already grabbed theirs. Hope you’ll enjoy it, and will consider leaving a review! 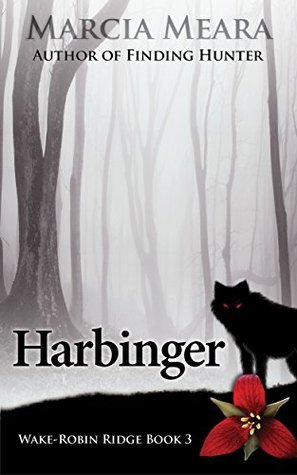 Just a quick reminder, the 3rd book in the Wake-Robin Ridge series is FREE today and tomorrow only.

The story of one man slowly being driven mad by guilt, while another grows closer to his very gifted son every day, Harbinger is full of love, laughter, and oh, yeah–shivers galore. Through it all, MacKenzie Cole  and that little boy named Rabbit form an unbreakable bond, as they work together to right a terrible wrong.

And remember, in the mountains, you can run, but you can’t hide! Not forever, and certainly not from the Black Dog! 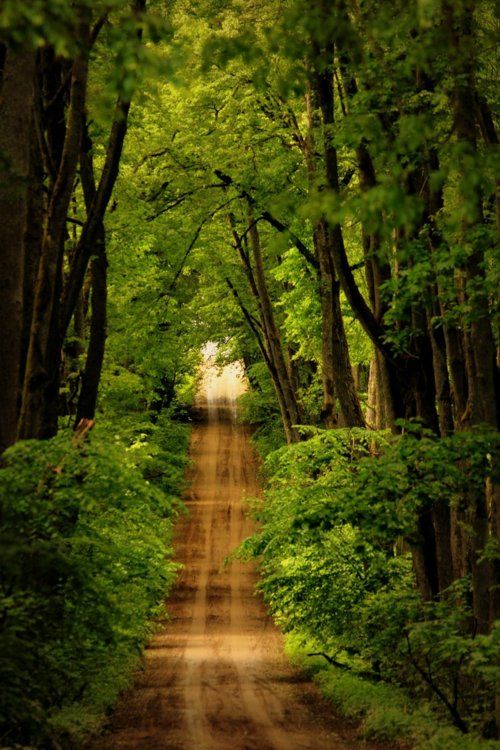 One of my inspirations for the Birdwell drive.

Just wanted to share a brand new excerpt from Harbinger, for those who’d like to read a completely different type of scene. This one features Mac and his adopted son, Rabbit, hiking up a long, deserted mountain driveway to an abandoned cabin. I won’t go into the reasons they’re headed that way, because it would involve spoilers, but I think the scene might capture your imagination, anyway. Hope you’ll take a minute to check it out, and my heartfelt thanks to Carmen for having me as a guest on her blog. (I’m still trying to get my head around the idea that someone in Romania is posting a sample of my work. What a world we live in!)

Check out the Excerpt HERE. 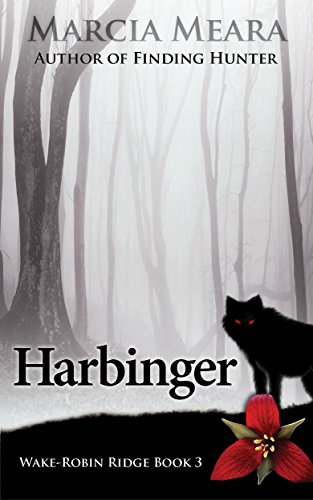 Available on Amazon in Print and Kindle Format

Wooohoooo. Spent yesterday with my good friend and Graphics Goddess, Nicki Forde, and this is what we came up with for Harbinger, Book 3 in the Wake-Robin Ridge series. What do you think? (We have time for changes, should there be any issues, but hopefully, this is a winner.) 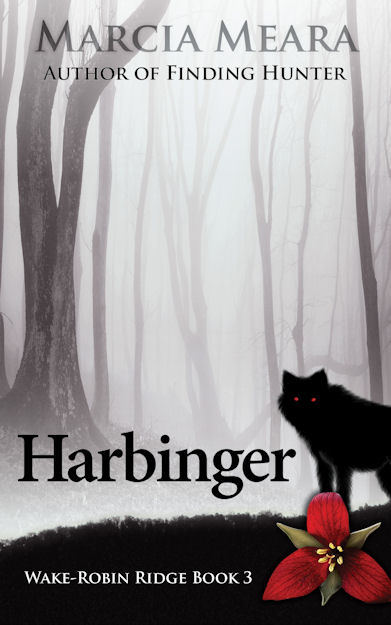