Back again with one last excerpt in connection with this Valentine’s Day Sale, which ends today. This one was a little bit harder to choose, as I couldn’t find a good scene that wasn’t way too long. But maybe the one I decided on will work to give you a feel for who Rabbit is. Hope you enjoy meeting the little boy who took over an entire series. Happy Reading!

The extraordinary little boy called Rabbit has the power light up the darkness, and the resourcefulness to save himself from the one person his grandparents had hoped would never find him.

EXCERPT from  Sarah’s POV, during their first breakfast with a goggle-eyed Rabbit, following his long journey through the wilderness:

If there was one thing this little boy was more interested in than the wonders of electricity and running water, it was my husband. He could barely keep his eyes off Mac, sneaking peeks every time he thought he could get away with it. It was time to find out why.

Last night, he had been so overwhelmed with the experience of being inside “Angel House,” we hadn’t spent much time asking him more about his life before reaching Wake-Robin Ridge. I thought maybe we’d sprinkle our questions in among other topics, so he wouldn’t feel like he was being interrogated. He was pretty talkative, if you approached it right.

“Rabbit, when you saw Mac yesterday, you said something about your gran, and about Mac having hair like a crow, is that right?”

He glanced at Mac, who was studying his own breakfast as though he’d never seen eggs and toast before, then he looked back at me and nodded.

“Can you tell me what you meant?”

His voice was sad and soft when he talked about his gran. I could tell he missed her very much. “My gran told me I had to find him. She said she seen me with a man with eyes like winter skies an’ hair like a crow’s wing. She said it was important for me to find him, because that’s where I belonged.”

Mac stopped eating, fork midway to his mouth, and eyes still glued to his plate.

“What do you mean, she saw him? Where would she have seen you with him?”

Rabbit’s face was solemn, indigo eyes round and serious. “My gran … she had dreams sometimes. Seein’ Dreams, she called ‘em. I never did have no dreams that came true, an’ my grampa said he never did, neither. But my gran did. She dreamed ‘bout the weather gettin’ cold when there wasn’t no reason to think it was gonna. An’ where to find ripe blackberries, when we thought they was all gone for the year. An’ ‘bout stuff that was gonna happen to Grampa when he went to get supplies. They always come true, her Seein’ Dreams.”

“And your gran dreamed about you with Mac?”

Rabbit aimed those adoring eyes at Mac, but Mac stuck to his pretense of eating his breakfast, as though he couldn’t hear this little boy telling his remarkable tale.

Turning back to me, Rabbit continued. “She was dyin’, you see. She was tellin’ me stuff I needed to know so’s I’d be okay by myself. She couldn’t hardly talk, her breathin’ was so bad, an’ Grampa hadn’t come back with medicine for her cough.”

His eyes filled with tears, and he was silent for a minute, but I stayed where I was, and let him tell me at his own pace. With a little shuddery gulp, he tried again. “My grampa, he’d never left us alone at night. No matter what, he was always back before dark. Only this time, he didn’t come all day, nor all night. And Gran and I, we knew somethin’ bad had happened. Maybe if he had gotten back to us, the medicine would have helped. I been thinkin’ ‘bout that for a long time. But she were bad sick. Never seen her coughin’ so much before.”

His voice dropped to a faint whisper. “There was blood.”

He stared down at the countertop, swinging his foot back and forth as he gathered his thoughts. “Gran, she held my hand real tight, an’ she told me what I had to do. She said I had to find my new people. I didn’t never know I’d have to do somethin’ like that someday. Grampa, he never would take me where there was other folks, ‘cause he said people was bad. He said they lied, an’ cheated, an’ couldn’t be trusted, an’ we was better off by ourselves. But my gran told me that some people was like what he said, an’ some people wasn’t. She said there was Good People in the world, too, an’ I had to leave the mountain an’ find them. An’ then she told me she seen me with a man with eyes like winter skies an’ hair like a crow’s wing, an’ that was where I belonged. The last thing she said to me was to find that man.”

He paused and looked straight at Mac, a profound longing shining from his eyes. “I promised her. An’ I found him.” His voice was so soft, I could barely hear him.

From the way Mac’s mouth tightened, though, I knew that he had heard, loud and clear. Without a word, he pushed his stool back from the island, put his plate in the sink, and walked out the back door.

Rabbit looked at me with a sad little smile. “He don’t like me much yet. But Gran weren’t never wrong. I can wait.” 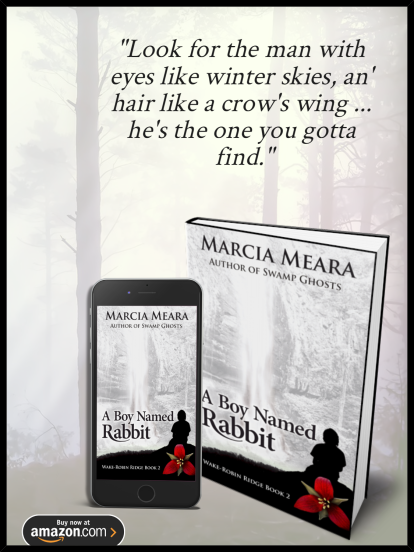 Hope you enjoyed this excerpt from the second Wake-Robin Ridge novel!
And my heartfelt thanks goes out to each of you for reading along, and for helping me get the word out about this Valentine’s Day Sale!
You guys are the BEST!