Today, I have something very special to share with you. Author and film producer Tony Lee Moral is sharing an excerpt from his latest children’s book, The Cat That Changed America, illustrated by Louise Groves. I think you’ll find this story as interesting as I do, especially if you have a love of wildlife in general and mountain lions, in particular. My thanks to Tony for sharing his book here today, and my very best wishes for a huge success. I know my grandson will be getting a copy of this one, for sure, and I’m guessing many of you will enjoy getting this book for the children in your own lives, too.  Enjoy!

Then the biggest and ugliest looking mountain lion that P22 had ever seen emerged from behind a tree. He had a thick brown coat, enormous paws, and muscles bulged from his long limbs. His name was Prime.

“Good Evening,” said Prime, with a smile, baring his enormously long teeth. “Looks like you’re having a dinner party, and forgot to invite me. Now what kind of manners is that?”

“We were just passing through,” Mom said. “We’ve finished now and we’ll be on our way.”

The Old Male snarled another smile that made P22’s hairs stand on end.

“Just passing through?” he said. “This kill looks and smells a day or two old. You’ve obviously been here before.”

“We’ve stuck to our territory,” Mama said bravely, even though she was quivering a little inside. Prime was about twice her size and she knew that she’d stand no chance against him in a fight. “Even though we are close to yours. But the deer have gone further west. As I said, we’ll leave now.”

The old male, leered at the two lion cubs who despite themselves, tried not to quaver.

Based on a true story with an imaginative retelling for young readers;
P22 mountain lion is born in the beautiful Santa Monica Mountains outside Los Angeles, California. But he is forced out of the mountains by Prime, a fierce older male lion who wants him dead. He heads east to stake out a new territory of his own in the bright lights of the big city. Along the way, he makes friends as well as enemies, and crosses two freeways, the 405 and 101. He passes through the City of Stars at night, and strolls down the Hollywood Walk of Fame, all the while trying to avoid those bothersome humans. After more adventures, he reaches the edges of Griffith Park. Can he make it his new home? 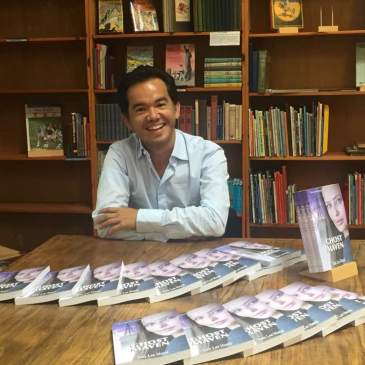 Tony Lee Moral is an author specialising in children’s, young adult, mystery and suspense. He has written three books on the Master of Suspense, Alfred Hitchcock: Alfred Hitchcock’s Movie Making Masterclass (2013) published by MWP books; The Making of Hitchcock’s The Birds (2013) published by Kamera Books and Hitchcock and the Making of Marnie (2005) published by Scarecrow Press. Tony was born in Hastings, England in 1971, before moving to California. He lived in Monterey and Big Sur for two years which forms the inspiration for his YA novel “The Haunting of Alice May”. His latest book “The Cat That Changed America” is based on his 2017 documentary film about P22 mountain lion and is aimed at young readers.