Hi, Everyone! Today, I’d like you to help me welcome my very special guest, C. S. Boyack, to The Write Stuff. Craig is is a friend and fellow author on the Story Empire blog, and he’s here to tell you a bit about his newest book, HMS Lanternfish. I found his information truly fascinating and can’t wait to read this one. I know you’ll see exactly what I mean, so let’s get to it. Take it away, Craig!

Marcia, I’m excited to visit your place today. Thanks for having me back, and know that my door is always open when you need to talk about one of your publications.

I’m here with a new book called HMS Lanternfish. This is the middle volume of a classic trilogy, and I expect to release the final one next year some time. Just to put a label on it, this is a pirate fantasy. It’s full of monsters, adventure, and a bit of humor.

Today, I want to talk about one of the subtle undertones of this series. Readers and fans like to get a behind-the-scenes look at how we tailor our books. This one keeps coming back to the front, and yet, readers might miss it if they aren’t paying attention. It’s about fatherhood.

James Cuttler is my main character. (He goes by the alias of Captain Bloodwater when it suits his purpose.) His father was a notorious operative called a wargler, and started the last war between Hollish and the allies of Prelonia and Saphelon. He was so good that he made the wrong side look like the aggressors and nearly tipped an entire continent on its head.

Eventually, James’s father took him away from the war and hid from the world until his dying day.

James is involved in a struggle to live up to his father, while trying to live down the man at the same time. In book one, he was mistaken for his father and that’s how he got involved in a new continent-wide war.

It goes even deeper, but you have to keep your eyes open for it. If it eludes you, that’s okay. This is just a small extra for those who want to look a bit deeper.

Serang is one of the stronger supporting characters in the story. She spent a considerable part of her life mourning her own father who was a fisherman. She also dedicated a lot of effort to revenge against the dragon turtle that took him. Serang lost her father when she was very young, so she’s further along the adjustment curve. You can read about her struggles in her own book, Serang.

James has a ward now, nicknamed Mule. Mule is a teenager in this book, James considers him a son, and the reciprocal is true as well. Now, while James is struggling with his own issues over his father, he’s trying to be a good parent to his son. He’s trying to keep the boy alive in a dangerous profession, while training him to be a top-notch navigator. There is also the distraction of young love to deal with. Mule is starting to have thoughts about his physical father’s profession that doesn’t involve sailing and piracy. Back to fathers once more, in a kind of triple-lutz way.

Inside HMS Lanternfish, James learns yet another fact about his father’s covert life, and how he was the one to introduce the bigger problem to their shores in the form of a religious cult.

There is a captured slave named Mal. He came from an island of cannibals, and the slavers took his entire family away. There are a few points in the series where he helps James come to grips with things that are out of his control (Like a surrogate father). Eventually, Mal is reunited with one of his own sons, but only one.

HMS Lanternfish has a section where an older pirate, named Chappy, has to deal with the ghost of his own father. Yes, an actual ghost. Told you it was a fantasy. It appears his childhood was not a happy one, but there is still some love for his long departed father hanging on.

I’m also going to talk about King Reynard of Hollish, who hasn’t made a single appearance in the series… yet. This is a boy king, and he’s been pushed by his advisors to finish his own father’s work by taking the entire continent under the flag of Hollish. It seems even royalty lives with the ghosts of their ancestors.

Trust me, the Lanternfish series is full of enough monsters, sea battles, and clashing swords to have a pretty good time without knowing all about fatherhood. There are some readers who like to look below the waves and this post was for them.

I’m going to drop some links, along with a cover and blurb for the new book. I hope some of your fans will find this peek inside my plot intriguing, and thanks for having me over today.

Blurb: The Lanternfish crew completed their original mission, but got exposed to a more global problem. An entire continent is at war, headed up by a head-strong young king with dreams of power, and pushed from behind by a mysterious religious order known as the Fulminites.

Rather than let their country fall under the iron boot of conquest, James and his crew set sail once more to see what kind of muscle Lanternfish can lend to the war effort. Acting precariously under an unofficial charter as a privateer, even his allies aren’t always his friends.

HMS Lanternfish explores new worlds on its way to war, and drifts considerably off course. It features an international crew of characters, and for fans of the first book, the root monsters are back, too. Tall ships, a few con games, martial arts, and everything you loved about the original book is all returning.

Hoist the colors and wheel out the guns. Lanternfish is taking to the high seas once more.

Also By Craig Boyack:
Voyage of the Lanternfish: Book one of the trilogy.

Serang:
A supporting story about one of the more intriguing characters. 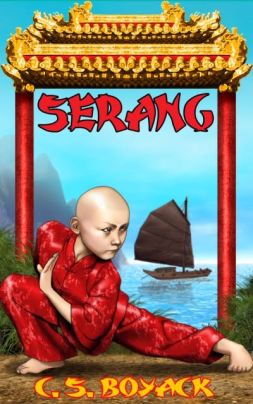