Here it is #ShareAReviewDay again, and I’m welcoming . . . er . . . MYSELF to The Write Stuff this afternoon. Had an opening, figured I’d use it. Hope you’ll enjoy this lovely review of The Emissary 2: To Love Somebody, and will pass it along on your favorite social media sites. Thanks! 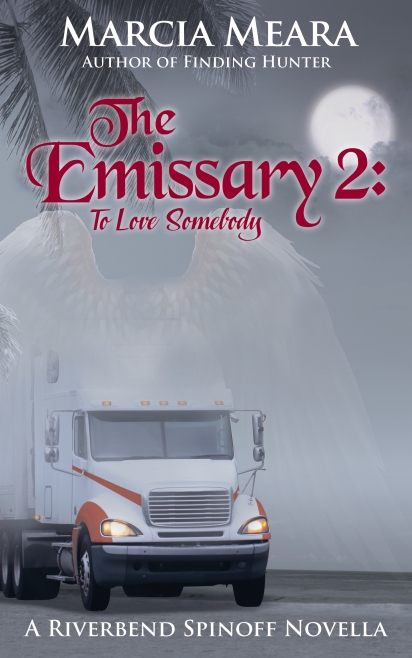 This urban fantasy is a delightful and heartwarming read that combines paranormal elements with the bonds of friendship, loyalty and family. Jake and Dodger are “emissaries” who have been recruited by the Angel Azrael to intercede on Earth when someone is about to do something, well…catastrophic, terrible or dumb. Jake and Dodger have certain rules to follow as they’ve died, yet physically remain on Earth, and can still suffer pain, just not death. They’ve already been there/done that. Now they get to travel around in a big semi rig and help others.

What makes this series (I highly recommend the first Emissary novella if you’ve haven’t already read it) so engaging is the emotional elements the author layers in her plot. Jake and Dodger are on the learning curve this time around, getting accustomed to their powers (under Azrael’s tutelage) while still learning about each other and how they fit into the world. The latter is a particularly rough spot for Dodger given the age at which he died.

As usual for a Marcia Meara story there is angst and hardship, but also plenty of triumph and heartwarming moments that result in misty-eyed reading. The bond between Jake and Dodger is wonderfully portrayed, the writing is polished, and the story flows beautifully. All three of these characters, Azrael included, will capture your heart. I love seeing the Archangel tread the line between his extraordinary power, humanity, and his attachment to his emissaries. A fabulous tale!

In Marcia Meara’s second installment of The Emissary Trilogy, a Riverbend spinoff series of novellas, we find our three heroes at it again. Beautiful new places, exciting new adventures, and a whole assortment of new problems await them, bringing tears, laughter, and an extraordinary amount of love along with them.

Jake and Dodger, the first (and so far, only) Emissaries to the Angels, are on the road again.

They’re looking for mortals about to take a wrong turn. You know the ones—the kid thinking about stealing from a corner market or the man planning to lie about a coworker and destroy her career. Yeah, them. People on the brink of making a mistake that could send them down that wrong road and jeopardize their mortal souls.

Of course, there are rules by which the emissaries must play, and the archangel Azrael stands ready to enforce them. First and foremost, a person’s free will must never be compromised. Emissaries are allowed to use only the smallest of mental nudges. Thankfully, a whispered suggestion here or images of a better course of action there is usually all it takes. The potential mugger walks on by. The thief drops the wallet back into the unattended purse. But whether the results are obvious or not, Jake and Dodger are fully committed to making a positive difference, even as they struggle with issues of their own.

Will Dodger get over losing his chance to learn what true love is all about? Will Jake survive the grueling angelic equivalent of Boot Camp? Will Azrael ever finish the Official Emissarial Guidebook—including the chapter titled Do Not Even Think About It?

One thing’s for sure—Jake’s and Dodger’s strengths are growing daily, as they help more and more people make better choices. But is the price for so much power higher than they’re willing to pay?

(NOTE: This is the second installment of a trilogy, and probably shouldn’t be read as a standalone. )

Buy The Emissary 2: To Love Somebody HERE

Marcia Meara lives in central Florida, just north of Orlando, with her husband of over thirty years, four big cats, and one small dachshund. When not writing or blogging, she spends her time gardening, and enjoying the surprising amount of wildlife that manages to make a home in her suburban yard. At the age of five, Marcia declared she wanted to be an author, and is ecstatic that at age 69, she finally began pursuing that dream. Her belief in the redemptive power of love is a unifying factor in both of her popular series and her poetry.  Today, she’s still going strong, and plans to keep on writing until she falls face down on the keyboard, which she figures would be a pretty good way to go!

Marcia has published six novels, two novellas, and one book of poetry to date, all of which are available on Amazon:

The Emissary: A Riverbend Spinoff Novella
The Emissary 2: To Love Somebody

You can reach Marcia via email at marciameara16@gmail.com or on the following social media sites:

24 thoughts on “#ShareAReviewDay Tuesday – The Emissary 2: To Love Somebody by Marcia Meara”

Suspense, Passion...Fiction That Flutters The Heart

Books! Where are the great books?

Exploring the World of Fiction

Navigating the Uncharted Waters of Life