A quick announcement that my latest story is out there in the world!

The Prince’s Protégé is available from today in all outlets, at the introductory price of $2.99 – if you enjoyed THE PRINCE’S MAN and THE PRINCE’S SON, you are going to want to read this one!

If you haven’t tried them out yet, what better chance than to pick up #1, The Prince’s Man for $0.99, for the next two weeks only. 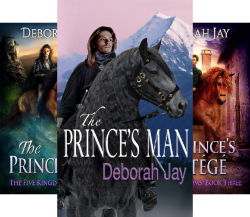 When I set out to write The Prince’s Man, I began with the tagline ‘Think James Bond meets Lord of the Rings’, because those are two of my favourite books/movies.

I’ve always felt a bit sad and frustrated for James Bond, because he is never permitted to develop as a character beyond the super smooth spy with no real life of his own. I wanted to start with a similar character, and allow him to grow and change from his life experiences. Enter Rustam Chalice – ‘ridiculously good looking’ (according to one reviewer), suave ladies-man, accomplished spy, and a vain, shallow man at the start of the story…

Being a first time fantasy author at this point (I’d previously written non-fiction and SF), I freely admit I was quite heavily influenced by Tolkein’s creations, but added my own ideas and slants to create a unique world with a history all its own that shapes the societies of The Five Kingdoms, in which the rest of the series takes place. Today, #3 in the series debuts, but believe me, there are lots more to come…

Find THE PRINCE’S MAN on sale at AMAZON, and a choice of OTHER RETAILERS

16 thoughts on “Release day! The Prince’s Protege is available on all channels & The Prince’s Man is on #sale #0.99”