This morning, I’d like to welcome Tina Frisco, who is sharing a review of her book, Vampyrie. I hope you enjoy checking out the review, and sharing on social media. Thanks so much! 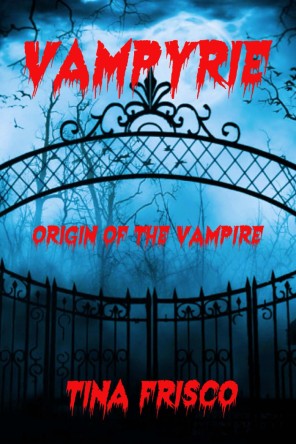 I never participated in the vampire reading craze that took over the fantasy genre after the successes of the famous books, “Twilight” or “Interview with the Vampire.” There was always too much blood and lust for my taste. Now upon deeper reflection, I may have missed out on some fascinating stories.

I also never considered the intriguing literary possibilities behind the disease of vampirism. Yet, that is exactly what attracted me to Tina Frisco’s hit novel, Vampyrie.

The protagonist, Phoebe Angelina Delaney is portrayed as a strong compassionate woman with a reputation for facing peril head-on. She is a fierce defender of her friends and loved ones. I immediately connected with Phoebe’s character and loved that she was written like a real person, filled with flaws and fears just like the rest of us.

Why did Phoebe’s father keep their family history a secret? Why did her mother disappear when Phoebe was a child? The story unravels, bit by bit, guiding the reader along on Phoebe’s journey where she must confront the secrets of her past and come to grips with the reality of her true identity. It’s not easy to face the real world when it turns upside down, but Phoebe shows us what’s she made of.

I was pleasantly surprised to see the character, W’Hyani, from one of the author’s prior novels, “Plateau, Beyond the Trees,” play an important role in this novel. The tie-in of characters was a brilliant addition by the author. What W’Hyani brings to this novel is the same thing she brought to the first novel – a sense of hope for the future of humanity; even though the characters find themselves embroiled in the midst of a war that must be won.

“Vampyrie” stands out from other supernatural tales because the vampire theory we have all come to expect has been rewritten with a twist where medical science skillfully revises the history of vampirism. This hypothesis holds a credibility that lends a sense of realism to the story I didn’t expect. It was a great divergence that kept me totally engaged in the mystery.

Yes, there was blood, and fangs, and some gore; but it wouldn’t be a vampire novel without those elements. I can only say I found myself pleasantly surprised when I discovered the fundamental theme of the book bestowed a philosophical message of growth, strength, and change.

If you think you know vampire novels, think again. “Vampyrie” rewrites the stereotypes and character archetypes you’ve come to expect into something fresh and new. I bet even the vampires approve!

What if vampires were not the undead, but rather the dying? What if there were two factions among vampires: the sustained and the unsustainable? And what if those factions were at war with one another over the life of a young woman who promised them a future? Vampyrie brings the myth of the vampire into the realm of possibility.

Phoebe Angelina Delaney is a reluctant genius and compassionate hothead. She finds herself in a pitch-dark underground and doesn’t remember how she got there. Did she drink too much alcohol and wander off in a stupor, or was she kidnapped by a malicious element determined to make her life a living hell?

Sir Michael Alan David is a vampire – an enigma, charismatic and mysterious, who weaves in and out of Phoebe’s life. Does he intend to use his title as a ruse to draw her closer to an unearthly fate, or is he a cloak-and-dagger knight in shining armor?

Too many secrets have been kept for too long. Phoebe must unravel the mystery in order to survive. Two major characters from the author’s first novel, Plateau, join forces with Phoebe to battle the demons in Vampyrie.

Tina Frisco is an author, singer-songwriter, RN, activist, and student of shamanism. Born in the U.S., she has lived most of her adult life in sunny California. She began writing as soon as she was introduced to a pencil, and has enjoyed performing her music publicly in many different venues. Her publishing history includes book reviews; essays; articles in the field of medicine; short stories; inspirational articles; her children’s book, GABBY AND THE QUADS; and her two novels, PLATEAU and VAMPYRIE. She enjoys writing, reading, music, dancing, arts and crafts, exploring nature, and frequently getting lost in working crossword puzzles.