Our next guest on #ExcerptWeek is Felicia Denise, who has asked me to share this excerpt with you. Welcome, Felicia, and thanks for taking part. I know everyone will enjoy reading this, and then sharing t far and wide!

Lenore “Lennie” Porter’s life had not gone as she planned.
The marriage she put her heart and soul into failed.
The man she sacrificed so much for abandoned her.

But Lennie refused to be broken. She pushed on, running a successful business and raising her three sons alone.

Through health scares and severe family dysfunction and trauma which forever changed their lives, the Porter family clung to each other to keep from sinking into the darkness.

With her marriage over long ago and her adult sons living their own lives, Lenore Porter decides to sell the cold fortress she worked so hard to make a warm, loving home.

A short, final inspection of her former home turns into a confrontation with ghosts from the past, and decisions and events Lennie felt she’d dealt with and moved on from.

Free, a Novella is a short, clean read recounting one woman’s determination to not be broken by life or lose her identity.

Anyone who knew Burt and Linda Kelimore knew they were devoted to each other. More than half a century had passed since the day they each ran into a mechanic’s shop in need of quick repairs. Though they were both on their way to meet other people, a thirty-minute conversation changed their plans for the evening and the rest of their lives.

With their time together dwindling away, the couple did what they had always done… shared each other’s company.

Linda set Burt’s plate aside, and Lennie gathered up the dishes and excused herself.

While putting the food away and loading the dishwasher, Lennie was surprised to see her mother enter the kitchen.

“Yes, yes, sweetie. Leave all this. I’ll get to it later. You can head on home now.”

Lennie reached for another dish but Linda caught her hand and held on.

Linda pulled her daughter into a tight embrace, speaking into her ear barely above a whisper.

“I know. His hospice nurse was here earlier and is returning soon. I talked to your sisters before you got here… and they each spoke to your father.” She pulled back, a pleading look in her eyes.

“I’ve never asked you for anything, honey and I know this is no small thing I’m asking of you now. But… I need this time with him alone. Right now, I’m no one’s mother or grandmother. Lennie, right now, I’m just a wife who has to say goodbye to her husband. Please don’t be angry with me or hate me, but I need to do it alone.”

Hugging her mother close, Lenore allowed the weight of her words to sink in. She did not want to leave. Her father was dying, how could she walk away?

Seeing the pain in Linda’s eyes, Lenore knew she would deny her nothing.

With a simple nod, Lennie returned to the den to say goodbye to her father… just as she did every night.

After a quick kiss on the cheek and a squeeze of his hand, Lennie told Burt she’d see him tomorrow, and turned to leave before she broke down. But her father held on to her hand with a strength Lennie didn’t think he still possessed. Lennie looked from their joined hands to her father’s face when he spoke.

“Very proud… of you, Lenore. Always… have… been. You help everyone… always.”

The weakness of his voice and the shortness of his breath caused Lennie to cringe. She wanted her father to stop talking, to save his strength. But, her own voice was lost to her, blocked by a lump in her throat which refused to move.

“I love you… baby girl.” He kissed her hand and slumped back in his chair, his energy depleted.

Lennie squeezed his hand one last time and rested it across his lap. With one simple nod to her mother, Lennie left the room, her calm belying the anguish ripping her apart inside. She wanted to scream, cry… stop the clock… make him stay.

With her bags in hand, Lenore Porter stood at the front door. Dizziness and nausea rejoined the inner turmoil threatening to break her. She had to leave… knowing she would never see her father alive again.

Instead of reaching for the door knob, Lennie took several steps backward until she could see inside the den.

Linda Kelimore had reclined her husband’s chair and climbed in next to him, cuddled into his side with her hand resting on his chest.

This is what her parents wanted… what they had planned. To spend their remaining time together… together as the couple they had been for fifty years.

With more determination than she felt, Lennie left the house, closing the door quietly behind her. 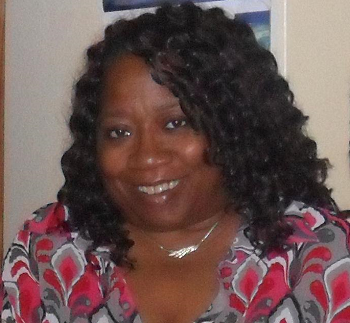 A wife, mother, daughter, sister, blogger… and self-published author, Felicia loves all things book-related and coffee-related. A southern girl by birth, the fifty-something, voracious reader now resides in Arizona (via Michigan and California) with her husband of thirty-three years. Their three adult children also reside in Arizona—with their dogs. Felicia frequently reminds them she is the only one of her parents’ nine children who isn’t a grandparent.

Writing has been a hobby of Felicia’s since grade school, but other than serving as editor and writing for her high school newspaper, she never publicly shared anything until the early 2000s when she began writing fan fiction. At the urging of a good friend, Felicia took on the challenge of NaNoWriMo in 2015, writing what would become her first published book, In the Best Interest of the Child. It was released in the fall of 2016.

Currently working on several projects, Felicia plans to release book 2 of In the Best Interest of the Child – Family Matters, in summer 2017.

17 thoughts on “#ExcerptWeek – Free, a Novella by Felicia Denise”