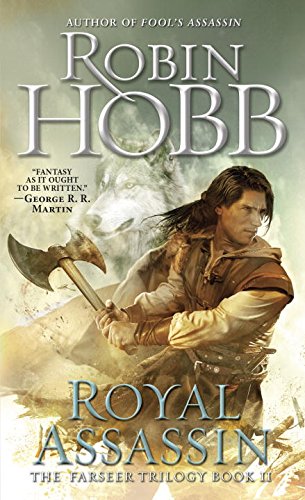 Fitzchivalry Farseer
A name and a character I can love!

Having come to epic fantasy reading very late in life (like in the past two years), I probably have no right to issue complaints or requests, however, that’s never stopped me before. And I am issuing both. I’ll start with the request. You fantasy writers out there, please . . . I beseech you in the name of every god and goddess on your wonderfully creative worlds . . . have mercy on your readers. Please stop using names for your characters that can’t be pronounced by the human tongue.

I think it’s James Scott Bell who warns writers against filling their books with “speed bumps” that slow readers down, and I promise you that giving your hero a name that starts with three consequetive consonants is a speed bump of major proportions. Every single time I come to a line featuring something that Sir Hrvetrkzll is involved in, I will slam on the brakes and try to pronounce his name in my head. It pulls me right out of the story, without fail. And like a Sunday driver out for a ride in the country, enough speed bumps in a row will send me home again, too frustrated to continue the effort.

I do realize that your dragon-slaying knight of the realm would sound silly with a normal, guy next door name like Fred. And his damsel in distress probably needs something jazzier than the equally girl next door name of Sally. Sir Fred and Lady Sally just don’t cut it. But imaginative names don’t have to be unpronouncable, do they? Perhaps they could be combinations of words, like Trollslayer or Flamingaxe, or even a series of words like He Who Whistles Dixie. I can read those without slamming on brakes.

Or they could be variations of names we’re already familiar with. Peeta and Katniss come to mind. This type would be more the way Robin Hobb went in her Farseer and Liveship Traders books. Names like Wintrop, Chade, Fitzchivalry, Brashen, and Malta are easy to pronounce, yet memorable in that they aren’t likely to be the names of anyone you’ve ever met. The habit of Hobb’s royal family in Bucktown naming their children after traits they admire is fun, too, resulting in characters named Chivalry, Regal, Shrewd, and Verity, for example. You get my drift, here, I’m sure.

And now my complaint. A name that sounds more like a sneeze than a word is no fun, and I wish fantasy writers, as much as I love them all,  wouldn’t hurt my brain with such.  Kvothe the raven, “Nevermore.”

13 thoughts on “#WednesdayPOV What’s In a Name? #wwwblogs”