Caledonian sprite, Cassie, attends a coven meeting with her friend and aspirant witch, Alison. The guest speaker for the evening is a water diviner – a human talent Cassie has spent millennia avoiding… 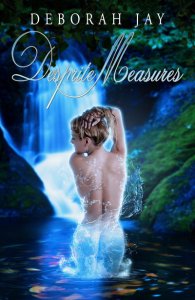 The coven, fifteen in number tonight including the two of us, was gathered in a semi-circle on the lawn around Brian Chivers, who was brandishing a split hazel rod rather in the vein of a blind man’s cane. We arrived in time to hear the end of his explanation, and positioned ourselves behind the others. It was as far from Brian as we could arrange without looking suspicious.

“… you can dowse with almost anything, the most popular these days being plastic rods because they’re light and long-lasting, but I prefer to use a natural material, and hazel has a particular affinity for water.”

Staying behind Alison, I peeked over her shoulder as the diviner raised his rod to show it off better.

“I cut this one a couple of days ago. See,” he ran his finger down one side, “how I’ve split it. A very delicate procedure on a branch as fine as this. And then,” he pointed towards the end, which was bound with white tape, “I’ve taped the end to keep the split from extending. It won’t last forever, but this will prolong it until the wood dries out completely, at which point it will need replacing.”

He marched to the top of the sloping lawn. “And now I’ll show you how it works.” He held the split ends of the twig delicately and proceeded to walk very slowly down the lawn, with his arms extended in front of him. “I’m looking for underground water courses, of which there should be quite a few in this area. Aha!”

The end of the twig twitched downward.

He continued his stately dawdle. As he passed his rapt audience I edged further behind Alison, but as if sensing my movement the twig jerked sideways, almost ripping itself out of Brian’s left hand.

“What—?” Brian snatched his twig back into its correct position, looking flustered. I guessed it wasn’t supposed to act that way. Mary, an older witch with a perfect Cleopatra bob in silver-grey and the eye makeup of an Egyptian maid, glanced over her shoulder, searching the ground behind us. Her eyes slid over me, searching for some other source to explain the twig’s aberrant behaviour. Evidently she also knew it shouldn’t do that sort of thing.

“Sorry ladies, I must have lost concentration for a moment. Just let me—aha! Here’s another one.”

He proceeded down the lawn to the bottom of the slope near to where the collection of cars was parked, marking out the sites of little underground rivulets, and in one case a quite large but deep water course that ran crosswise, narrowly missing one corner of the log cabin. And he was accurate, too. Fascinated to be for once so close to this human ability I’d done my best over the millennia to avoid, I checked his findings by opening up my senses and reaching down into the ground, feeling where the water ran, seeing the aquifers below our feet as a 3-dimensional image overlaid upon the human vision I was using at the time.

The masculine bellow snapped me back to the surface in time to see Brian Chivers spinning in a circle, grappling with his dowsing rod as it yanked and twisted in his grip. Horrified, I withdrew my sprite senses and the thing ceased its errant actions. Brian glared wildly around, scanning the faces of the stunned coven.

“Whoever’s messing with me, you can stop right now!” He glared at the stunned group of women. “I have never been treated like this!”

You can find DESPRITE MEASURES on Amazon

A man with dyslexia writing about this and that and everything else!

A Quiet Place of Inspiration. We love art and literature.

Writing - Loving What I Do and Doing What I Love!

Suspense, Passion...Fiction That Flutters The Heart

Books! Where are the great books?

Exploring the World of Fiction