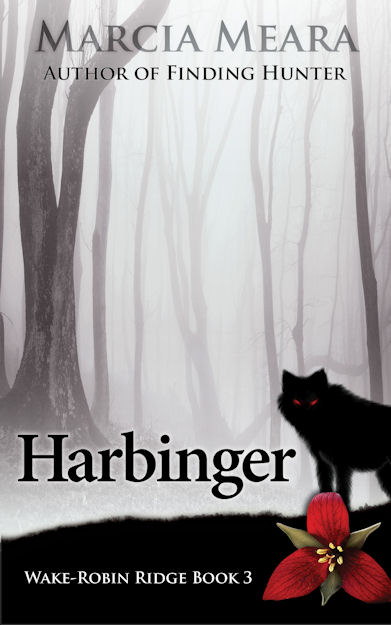 Nope, I haven’t actually launched this book yet, as I haven’t finished deciding how to go about it, but it is available in Kindle and print format, and already selling, in spite of my lack of a cohesive plan.  (Boy, do I hate that “P” word.) So I figured I’d better let you guys know, at least! This is the third book in my mountain series, and for those of you who enjoyed #WakeRobinRidge and #ABoyNamedRabbit, I hope you’ll be eager to follow Rabbit’s latest shivery adventure.  (Meanwhile, I’m trying to remember how to put the image/link in the right sidebar with my other books. Doh! Brain is on vacation!)

“. . . he felt the wet slide of the dog’s burning hot tongue on his face, and the scrape of its razor sharp teeth against the top of his head. A white-hot agony of crushing pain followed, as the jaws began to close.”

The wine-red trillium that carpets the forests of the North Carolina Mountains is considered a welcome harbinger of spring—but not all such omens are happy ones. An Appalachian legend claims the Black Dog, or Ol’ Shuck, as he’s often called, is a harbinger of death. If you see him, you or someone you know is going to die.

But what happens when Ol’ Shuck starts coming for you in your dreams? Nightmares of epic proportions haunt the deacon of the Light of Grace Baptist Church, and bring terror into the lives of everyone around him. Even MacKenzie Cole and his adopted son, Rabbit, find themselves pulled into danger.

When Sheriff Raleigh Wardell asks Mac and Rabbit to help him solve a twenty-year-old cold case, Rabbit’s visions of a little girl lost set them on a path that soon collides with that of a desperate man being slowly driven mad by guilt.

As Rabbit’s gift of the Sight grows ever more powerful, his commitment to those who seek justice grows as well, even when their pleas come from beyond the grave.