Fire Ant
(There are several varieties, but all look similar.)

I’ll tell you what they have in common: a second trip to the ER in eight days and  a ninety-minute IV hookup! Yep. I’m not sure I’ve ever been treated in an ER before, and now I’ve had to visit one twice in just over a week! Saw the same doctor, too. We’re on a first-name basis, now.  And what caused this week’s drama? A stinkin’, vicious little  invasive critter known as a fire ant! 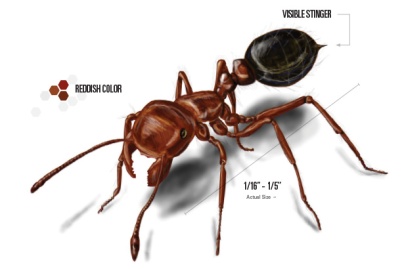 Note the BIG Jaws on the head, and the
pointy STINGER on the other end!

Fire ants aren’t content with just biting you, like most ants, oh no. They bite in order to hang on to your skin while they STING the hell outta you with the HARPOON in their posterior region! Fire ant bites cause a red lump with a “blister” (a/k/a pustule, ick) on top. The sores  itch like fire–hence the name–and on many of us can last ten days or longer before finally shrinking to nothing and disappearing. You can end up in the hospital if you are allergic to them, or, like me, accidentally scratch them open and they become infected. Often seriously so.

Tuesday afternoon, I realized that the one on my arm was not looking good. I treated it with some  antibiotic ointment and crossed my fingers. Yesterday  morning, it was looking much worse, but I couldn’t get in to see my doctor. Within a couple more hours, it was a mess, and I had red streaks about 6 inches above the bite, running in several directions. This is what we used to call “blood poisoning” and it was NOT to be dismissed lightly. Today, it’s known as ascending lymphangitis, or an infection spreading upward through the lymph glands, toward the heart! (BTW, “cellulitis” just basically means “infection of the cells.”)

No way I could wait for my doctor to be available.

Back to the ER I went, where they admitted me immediately and said they needed to get antibiotics in my system as fast as possible, thus the IV. On the happy side, the red lines started fading within a couple of hours, and the rest of my medication can be taken via the usual route, by mouth with a glass of water, over the next week.

Typical Fire Ant Mound
(Though They CAN be Smaller, Too)

I’m reporting this in detail because I want those of you who live in areas where fire ants have taken over to be very aware that their bites can be more than just a painful annoyance. The current thinking is, do NOT puncture the blister on top of the bite, and if it accidentally gets broken open, clean immediately, and treat with antibiotic ointment. If it starts oozing and hurting, get medical treatment before you end up with streaks running up your arm. Lymph gland infections can lead to all sorts of problems, including organ failure, and they spread very quickly.

Speaking of spreading, these nasty little ants have been doing so (especially in the southeast) for years, via the usual methods, plus the ability to make large, floating mounds of nothing but THEM, and drifting along on water to reach their next area to colonize. They move this way often after storms and flooding.

Nuthin’ Here But ANTS, Being Carried Along
on Top of the Water. Soooo . . .

Praemonitus, praemunitus!
or
Forewarned is forearmed.

*NOTE: This has been a Public Service Announcement.*
😉

78 thoughts on “Enough, Already! Or, What Do Fire Ants, Cellulitis, and Ascending Lymphangitis Have In Common?”