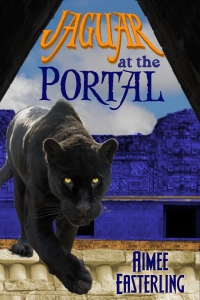 I know this is excerpt week, but I’m putting the finished touches on the first draft of my newest novel (on sale during preorder for 99 cents!)…which means that none of that book is ready for prime time and my head refuses to think of anything else. So I hope you’ll get something out of this title-choosing post instead.

Of the three-legged stool of title, blurb, and cover, my current book’s title gave me the most trouble. And I’ve also realized, from watching my own reading habits, that a book’s title has a big responsibility even after the text is bought. If a reader has a stuffed black and white kindle (like I do) and a bad memory, then title is the one last shot a book has for pulling itself out of the sea of other books and making someone choose to read the first page. (Yes, we all want our books to be bought, but you don’t gain fans unless those bought books are actually read!)

So I decided to get serious. I’m working on an urban-fantasy novel about a were-jaguar and an ancient Mexican god, but my working title (Stray) just didn’t seem right. After doing extensive brainstorming, I narrowed down my title choices to The Olmec Curse, The Olmec Trap, Tezcatlipoca’s Paw, Jaguar at the Portal, Hunt for the Wind God’s Tomb, and The Jaguar Priestess. Then I headed over to http://www.google.com/insights/consumersurveys/ and set up a survey to find out which title potential readers would choose.

I think it’s important to narrow down your options to people who are likely to read within your genre, which you can do in one of two ways. The more expensive way is to set up a two-part survey, where you ask “Do you read urban fantasy?” as the first part, then explore your titles as the second part of the survey. These surveys cost approximately $1 per response.

The cheaper way is to simply add a none-of-the-above option to the end of your title list. I worded mine “None of the above: I don’t read urban fantasy.” This keeps costs down to 10 cents per response, which allowed me to poll 200 people for $20.

I also found that urban-fantasy readers skew younger than I’d thought. I set up the survey to only ask people between the ages of 25 and 54 my questions, but the youngest demographic I included was also the most likely to read urban fantasy. That suggested that I should have polled 18 to 24 year olds as well, and that I should realize that my readers are probably younger than I am.

Okay, how about the actual results? I’d been leaning toward the title The Olmec Curse before running the survey because I felt the unfamiliar word would intrigue people who might enjoy the archaeological/mythological element. That may or may not be true…but The Olmec Curse also tied for last place. (This is why you shouldn’t let me choose your title without some extra data!)

Hunt for the Wind God’s Tomb had the best results, but I didn’t choose this title either. Why? Because my current readers are over 50% women due to a light but significant love story in each of my novels and a tendency to focus on touchy-feely emotions more than on external action. And, among women, the top title on my survey was Jaguar at the Portal. (Men liked this title too, but only half as much as they liked Hunt for the Wind God’s Tomb.)

To sum up: if you’re willing to sink a little bit of cash into the project, I highly recommend Google’s customer survey option. It would be worth $20 just to know the likely age and gender of urban fantasy readers, but getting feedback on titles is also a major boon. Although, if I had it to do over again, I might commit a bit more money to the project to ensure that I got at least 100 responses from readers of my genre.

Now, back to writing that climactic scene that’s been sitting in the back of my mind for the last month and a half! I hope the readers enjoy the ride as much as I’ve enjoyed writing what is my favorite book to date.

6 thoughts on “Choosing the best title for your ebook”