Excerpt from THE PRINCE’S MAN 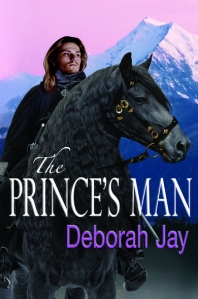 Rustam squeezed past Nightstalker, and scrambled up behind Elwaes. He had no idea what tunnel creepers were, but the fear in the elf’s voice was all too apparent.

The grey leapt forward, kicking loose stones from beneath its feet to clatter away down the mountainside, adding to the horses’ rising panic. Sickly pale, bloated creatures swarmed out of the holes, and Rustam gagged on the mephitic stench that preceded them. Risada’s mount spooked sideways and jumped half a length up the left bank to reveal the pallid, segmented body of a creeper blocking the path ahead.

The nightmarish thing, which stood as high as the gelding’s chest, shifted its weight rapidly between its six legs, threatening great speed although the huge body merely quivered up and down with the multiple joints clicking loudly. Tiny eyes glittered from behind its mouth-parts, vanishing as ragged fronds waved under its pincers. Those pincers with their wickedly serrated edges and pointed tips held Rustam’s horrified gaze, and he felt his empty stomach constrict even further: the monster’s exoskeleton looked as tough as armour, probably impervious to steel, except perhaps at the joints. Not that he had any desire to get close enough to test the theory.

The grey’s feet scrabbled on the uneven surface and one hind hoof went down a hole.

With an almost human scream of terror the horse catapulted up and forward, landing on the trail beyond the creeper. Nightstalker snorted and reared, bringing her forefeet pounding down on the monster. Rustam heard its body casing crack and it emitted a high pitched wail as it disappeared beneath the mare. He yelled encouragement to her as they fled down the steep track, but more of the enormous insects erupted from their burrows and swarmed towards them.

Rustam drew his sword, his injured hand forgotten in the adrenaline rush. He knew it was hopeless long before the blade cleared the scabbard. Even with his speeded time sense and disregarding the creepers’ armoured hides, there were just too many of them.

“How do we fight them?” he yelled at Elwaes above the roar of wind and clattering hooves. Their headlong flight ended abruptly as the grey sat back on its haunches and skidded to a stop. The trail ahead was invisible, obscured by a seething mass of invertebrates.

“We don’t,” answered Elwaes and the defeat in his voice made Rustam furious.